Part I Of The Cuteness Trap

Have you ever wondered why babies look so cute?

The ethologist Konrad Lorenz referred to the appeal that the facial and body features of infants and children are by design intended to trigger a desire to care for the infant or child. He referred to this “cuteness” (cuteness trap – my words not his) period as ‘baby schema’ (Kindchenschema).

These same physical triggers appear in other animals for the same reasons and produce the same results.

The incredible power and influence of the `baby schema` is illustrated in its interspecies crossover. The cuteness that triggers the need to nurture in a tiger looking at her cub will also trigger an “Aw, isn’t that cute!”, from a human being. Consider that tigers are predators known to prey on humans and you will get a sense as to just how powerful an evolutionary tool is ‘baby schema’. 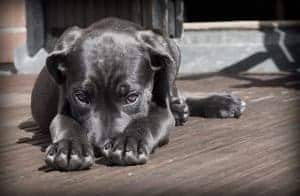 The irony for the Cane Corso and many similar breeds is that when the ‘baby schema’ (cuteness trap) is triggered in their mothers, she structures her parenting approach not by the cuteness but on the skills that cute puppy will require to survive and thrive as an adult. One of those lessons is, cute will only get you so far in life. Another, is cute or not, sometimes, I’m not asking you, I’m telling you and get used to it now because there others coming after me that won’t care how cute you are – or were.

The Cane Corso mother is not overly influenced by the cuteness trap and she does not forget what her cute puppy will grow into and she parents with not just the present in mind but the future. Whereas with humans they often let the cuteness lull them into a false sense of security and fritter away the timeline in which their dog will be the most malleable. The dog grows up without learning how to exercise their “suck it up” muscle and acquires an inflated sense of its place in the home, neighbourhood and the world in general. This parenting style byproduct may sound familiar to anyone that has spent time with children raised with the “everyone gets a trophy” mindset. It sounds good on the surface, but it is what happens when young minds are at their most flexible and resilient that prepares them for later life’s realities.

Raising a stable and responsive Cane Corso requires much more than nurturing. Proper ownership must be accompanied by frequent daily reminders as to who is the teacher and who is the student. Also, as they mature, the expectations as to obedience need to be more in keeping with what they (or any dog) is capable rather than the dismal treat based trick levels required to earn a pass in many ‘All Positive/Purely Positive/Force-Free’ dog training classes.

Perhaps the best metaphor to distinguish between how a mother dog and a human respond either to or in spite of the cuteness trap (‘baby schema’) is that with a mother dog it is traditional parent/child, whereas with many people it is more grandparent/grandchild. As one might expect over the long term the differences in these relationships are bound to produce very different results from the perspective of shaping a child or a dog regarding fulfilling potential and maximizing the odds of future success. 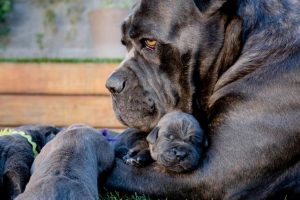 This emphasizing of relationship and high-level obedience goals by no means is intended to suggest that Cane Corso owners should not cuddle and love their dogs. It is to say, that fulfilling the nurturing component is not enough to protect your dog and prepare it for lifelong success.

Sometimes we forget that for many, if not most humans, love for a puppy or irrespective of ‘Baby Schema’ for a dog or dogs, in general, is effortless. Building a longterm relationship that is also founded on respect is another matter. It requires work. More so with some breeds than others and the Cane Corso is one of those breeds. As a result, nurturing must be paired with the ongoing reinforcing of clarity regarding the relationship and the pursuit of high-level obedience compliance.

Part II of The Cuteness Trap 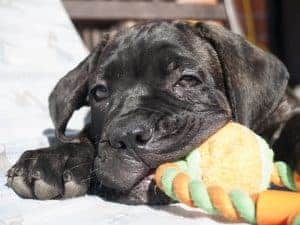 All too often the relationship and training decisions made for puppies with guarding genetics or naturally well preserved working lines, are made not only by how their puppies look but by how they behave during from birth to the first year to eighteen months of their lives.

To the untrained eye there often doesn’t appear to be that much difference in the way an immature Golden or Labrador puppy behaves and that of a breed like a Cane Corso. As a result, they proceed with a “how bad can it get” attitude about relationship and obedience. Concerning the aforementioned retrievers, they may be entirely correct. At worst guests will be joyously jumped and slobbered on, and the dogs won’t be as welcome at as many family events as they otherwise might. With a breed like a Cane Corso, however, the results are often entirely different. Starting at about eighteen months of age as they enter adulthood their owners find that the previous unbridled joyous retriever like greeting is gradually replaced with behaviour more in keeping with their guarding genetics which is fine except without the correct foundation in place it too will be unbridled.

Many people are unaware that it is a biological reality that puppies have what amounts to a built-in ‘governor’ that temporarily tamps down many of the breed’s stronger characteristics. This ‘governor’ remains in place until they reach young adulthood.

The signs of what they will become are more often than not there to observe by the very experienced. However, much of the genetic potential and personality characteristics are sufficiently diluted that people that might be less experienced with the breed type often miss the cues that signal that the dog they own is exceptional and as such requires special handling during its formative period.

Some companion dog owners of the Cane Corse may get signs their breed’s genetics between 6 – 9 months. However, many unwisely still give the behaviour less weight then they should. 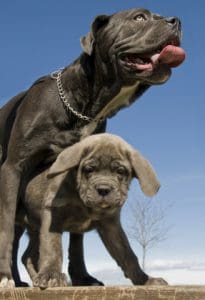 On average it isn’t until a Cane Corso arrives between young adulthood (18 months) and full maturity (3 years of age) where an event occurs, and it becomes evident that their cute puppy has grown up and become a guard dog.

Nature never intended deliberate parenting to wait until the cuteness period expires. With some breeds, this leads to comparatively minor problems with obedience and unruliness. It can be quite another story with a guarding breed like the Cane Corso.

Failure to lay an early rock-solid foundation with a maturing Cane Corso is one of the primary contributing factors to incidents. To make matters worse without the aforementioned foundation, many owners find this late in the game, it very difficult to change the behaviour of their now very large, capable in body, mind and willpower, confident, Cane Corso.

Not beginning relationship clarity and genuine obedience training from the very beginning with a Cane Corso are problematic from practical perspectives that are less influential in less businesslike breeds when the piper requires payment.

Changing the behaviour of a delinquent 60 pound Golden Retriever bred for maximum compliance and malleability is one thing. It is quite another in a Cane Corso that at the same age will often be in the 100 pound plus range and has compliance and malleability standards based on respect earned along with their formidable genetic predisposition for guarding. The handling skills, time commitment and as a result success rates for these two scenarios are significantly different and as such, it is imperative that Cane Corso owners begin formally working with their dogs at a higher standard from the beginning.

If not, and as is often the case, they find that they do not have what it takes to train the unwanted behaviours that led to the incident, out of their Cane Corso there options will have dwindled to three.

The first option is a highly restricted lifestyle which may include, confinement with crates and higher fencing, muzzles etc. The second assuming the dog has not yet bitten or made serious attempts to do so, is rehoming. This may mean being returned to the breeder or sold to a more experienced home. More often it means to surrender to a rescue.

The fourth option is one that the Cane Corso because of its unique characteristics and as a result difficulty in rehoming all too often is subjected to, is euthanasia. These limited options are not speculation or scaremongering. It is a Cane Corso reality that is occurring now with increasing frequency. It is a pattern we have seen in the past with other guard-oriented breeds such as the Doberman, the German Shepherd, the Pit Bull the Rottweiler. 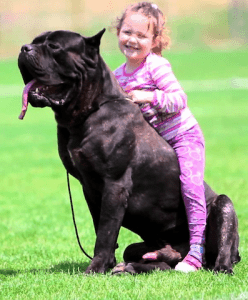 However, what in one set of hands can be a beautiful once in a lifetime canine companion – can in another set of hands – if not taken seriously and handled appropriately – become a gun with a brain.

P.S. If after reading this you are wondering where to go from here send me an email with a little background and we’ll get you on the right track as far as relationship building and training.

P.P.S Also ask me why we sell the WadeCollar PowerSteering Dog Training Collar to More Cane Corso owners than any other breed.