No Crate And Six Mile Walks 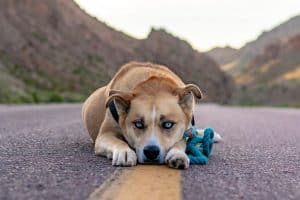 Instead of a crate, my six-month old Boxsky puppy gets to sleep in my room with the door closed. I have trained him thoroughly and have a professional dog trainer as an aunt, and I’ve learned everything from her. But yeah, I could definitely still be doing something wrong and need someone’s help!

All of a sudden, he just started hating my room and not wanting to come in at night, or if he came in, he’d whine all night long. I would get up every single whine or bark to correct him while staying calm and collected and assertive.

I do this all night and have only been getting 3 hours of sleep a night (but luckily, my mother takes the dog in the morning for his walk), but nothing seems to be working. We’ve tried putting him in other rooms for the night, and he is totally content. I am at a loss and do not know what to do. There is no difference in the rooms; they both have people in them, the same amount of noise and light and space.

I know you might be thinking well, just let him stay in the other room, but he can’t because of certain people in the other rooms who are not fond of dogs. And I cannot leave him out because then he will become bored and curious and will start chewing/ eating things.

And another thing I would like to mention is that since this dog was around four months, he’s been walking 6 miles every day and playtime with another one-year-old puppy.

And on his walks, he walks right beside me, and I’m dominant. So it is not that he’s not getting enough exercise. Yes, he is still young, but I want to nip it in the bud fast or else I’m afraid I’ll never sleep again.

No one has ‘trained him thoroughly,’ or is, as you describe your aunt, ‘a professional trainer.’ She may think she is, but if what you’ve described is based on her guidance, she is nowhere near what I would refer to as a professional trainer. The mistakes you’re making are rookie training, trainer-wannabe mistakes. You’ve tried to train him, maybe. You’ve used ill-advised pseudo-science and amateur dog psychology recommended by someone that fancies themselves a professional dog trainer, maybe. But, no, there has been no legitimate canine behavior training and modification knowledge at play here. Even an amateur trainer would have recommended against a 6-mile hike every day at four months of age. At that age, a litter gets exercise by playing in short bursts, not going on a marathon.

I won’t say for sure in your case. Still, typically when people say they are ‘dominant,’ it’s usually another red flag that they’ve been exposed to the pseudo-science methods promoted by amateur dog trainers. They are various degrees and manifestations of All Positive/Purely Positive/Force-Free/Never Say No/R+…’, treat, treat, treat, and ‘Might Is Right’, Alpha, Pack Leader, Dominant (Yank and Crank).

People who call themselves professional trainers rarely know what a professional is; otherwise, they would never use and sully the word. You don’t become a doctor, a lawyer, an accountant by saying, ‘I’m a doctor.’, ‘I’m a lawyer.’, ‘I’m an accountant.’ There is no such thing as a professional dog trainer. The dog training industry is unregulated, and anyone can call themselves a professional dog trainer. Until you meet a real dog trainer, they get away with it. That’s why the nonsense that you’ve been exposed is so prevalent. Typically, they do little good and often a lot of harm. So, let’s put to bed the idea you or your dog have been exposed to legitimate dog training and behavior modification.

I can’t ‘blog-fix’ your dog, but your dog likely can be repaired, and here are some things to get you started.

Do You Absolutely Need A Crate?

Do you absolutely need a crate to raise a dog? No, but you don’t absolutely need a crib, a playpen, baby gates, and other various accouterments during the first stage of parenting a child either. Does it make it easier and safer to keep safe and shape an infant to a toddler to a child? Of course. A mother dog is a full-time mother. A puppy owner rarely is on top of things as diligently. I should think you’d need a crate far more than a mother dog needs her litter’s den. And children don’t have denning instincts where they might perceive a crib or a playpen as a sanctuary as a properly crate trained dog typically does.

I recommend reading this eBook to get you started. (You have my permission (I’m the author) to copy and forward it to your aunt without paying for a second copy.)

I also recommend seeking the assistance of someone legitimately knowledgeable and experienced. If you can’t find someone local, then book a ‘Virtual +’ – Training session with me.