Dog is afraid of eating and drinking out of a bowl. 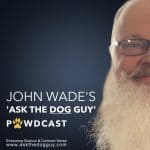 The 'ASK THE DOG GUY' PAWDCAST
Dog is afraid of eating and drinking out of a bowl.

Could you please help me figure out why for the last 3 years my 12-year-old mixed black lab refuses to drink out of a bowl and now even a flat platter. She approaches her food bowl with fear as well. If there is even the slightest bit of noise or if her food drops on the plate (flat also) she cowers. She will eat snow, drink rainwater off the deck and water from the bird bath.

Our vet said it was not uncommon for elderly dogs to do this. Because she has cataracts she explained it could be that she feels like she is going into a tunnel. I thought she would eventually get thirsty enough and succumb to the platter, but she circles around it and refuses, so I gave in and poured it on the floor where she lapped it up one glass after another. Is this just a bad habit? Should I just accept that she is old and continue with what I’ve been doing?

I will shortly be looking for volunteers to test a theory I have as to what is causing this issue with at least some of the dogs. It may provide a potential and relatively simple and inexpensive treatment. (Or it may be a dead end.) It’s going to take me a while to find the time to get everything written out. Please be patient.

When I first read this I found it mildly amusing. To hear of a dog with even a speck of Labrador Retriever being afraid to eat and drink is like finding a couch potato afraid of the remote. After a bit though I got to thinking were I in her paws and something was making me afraid to do something critical to my very existence it wouldn’t be so funny particularly considering how often she must face it.

Certainly something triggered this but what is moot. I’m betting this dog has other issues. Eccentricities that indicate a predisposition for anxiety. Thunder, fireworks, hot air balloon phobias for instance or just a nervous dog that when something scares her it sticks. In this case, the fact  that it’s associated around one of the basic necessities of life makes it likely that this is a “wiring” problem more so then cataracts alone.

If we were able to make it impossible for her to eat or drink any other way then out of regular bowls she would eventually succumb. I have never known a physically healthy creature to avoid water. Even animals that know full well there are crocodiles in the water will in spite of their fear drink when they must. However with your dog, even if I were willing to wait her out by making it impossible to otherwise get sustenance, what’s the point? She’s likely a dog predisposed to anxiety now going on 13, you’ve coped with this for 3 years, why not for a few more? Why put either of you through it. Besides, at 13 her kidneys may not be as efficient as they once were and it may be dangerous to wait her out.

If you want to try a couple of more things, see f she’ll chew on ice cubes.  Slightly more convenient and less messy for you. Or buy another bird bath made with the same material as the one she will drink out of but where the bowl is removable. After she’s been drinking out of that in the yard for a while. Bring the bowl part in and see what happens.

Trying her out on an anti-anxiety medication for 12 weeks might be worth a shot as well. For most behaviours you’d have to form a behavior modification plan as well but if we could calm her mind, I should think that the pleasure of eating and drinking would be enough positive reinforcement.

Much to my surprise, based on the comments and private emails I receive this problem is more common then I would ever thought. I’m beginning to develop a theory as to why. I need to see some video of dogs refusing to eat and owners attempts to encourage them. So feel free to send. If the file is to large send to my email by uploading to www.wetransfer.com. It’s a free service that works simply and well.

Here are some of the videos sent in so far (and comments below the videos):

296 thoughts on “Dog is afraid of eating and drinking out of a bowl.”