Our Moms Are Our Dog’s Best Friend by John Wade

I’m not sure where the phrase, “a dog is man’s best friend” came from but it really needs the addition of “and a family’s mom is a dog’s best friend”. Mother’s day is as good a time as any to take a look at the role moms play in making it possible to have a family dog.

The rest of us can think and say what we will but who do we think we’re kidding when we say, “Don’t worry, I’ll feed, him, exercise him and clean up after him! Can we keep him!”? We’re not kidding our moms. We have sketchy track records pertaining to promises and mundane activities not so easily forgotten by the lady that actually oversees day to day operations. Moms know who is ultimately really signing the responsibility cheque if she says yes. Even when dad is one of the cheerleaders, she’ll roll her eyes. She knows that in her absence dad is one weekend away from wearing unmatched socks, being on a first name basis with the pizza delivery guy and experimenting with various ways of cutting his own hair.

Without moms to keep an eye on the water dish there’d be a lot more dogs drinking out of toilets. Moms don’t wait until the last few crumbs of kibble in the bag to buy more dog food either. If it weren’t for moms the average dog would be a little taller than the norm because who else would ever think that a dog’s toe nails might need clipping once in a while? If it wasn’t for mom, just who would be making sure that the colourful extras in the dog’s last poop were actually the crayons gone missing? Most dads would decide to wait it out and hope for the best. 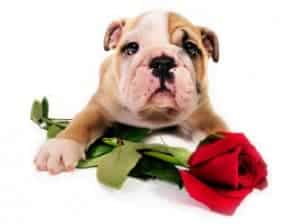 Who springs into action when they hear one of the kids yell, “Max got out the door and he’s playing in the road with some of mom’s underwear!”? Will it be mom or dad? No contest. A mom could hear those words while in the midst of a hot shower and be halfway to the door while dad’s wondering if by underwear the kids meant bra or panties.

Mom will head out there using with one hand trying to tie and keep her bath robe closed and the other to swing a looped leash like a lariat, dodging cars and herding Max like a she’s cowgirl cutting cattle. Meanwhile dad will still be at the window pondering whether he should have mentioned that the back of her robe was tucked up under its belt.

Who other then a mom would keep her grip on that leash when the madly jumping Max takes note of the striking similarity between the dangling frayed end of the robe’s terry cloth belt and his favourite rope toy and so decides to subject it to a comparative tug test. He soon proves to mom, the gathered neighbours and dad at the window that it is indeed impossible to tie a proper knot in a bath robe with one hand whilst on the run.

Perceiving the change of pitch in her voice as joyous encouragement Max really puts his heart into it and goes on to discover that once the belt comes off, given the proper attention the robe will follow.

Modesty be danged. A mom still won’t let go of that leash.

It is by the grace of moms that the family dog survives and thrives and because of that grace, the rest of the family enjoys canine companionship. If you have a dog, go hug your mom this mother’s day.