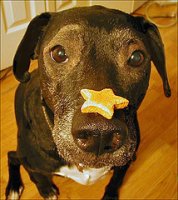 I hope you can help me. When my 18 mth old Labrador Retriever X sees another dog while we are walking, she bristles, barks and lunges at the other dog. I’m the only one she does this with, we had her evaluated at a reputable training facility and she was perfectly fine on and off leash. They said she was just protecting me. I’ve tried walking by stuffing her mouth with food, watch me, sit or lay down using my foot on leash. Its just a constant battle and makes walks unpleasant for both of us. If you could offer some suggestions, I realize I must be the problem and have to change, I would really appreciate it. Thank you so much, looking forward to your comments. -T.S.

While there must have been some dog, somewhere that had its aggression tempered  because someone stuffed its mouth with food, true aggression is not going to be impacted by treats. I can imagine a police officer faced with some belligerent character saying, “Forget the Tazer, I think we’re going to need to distract him with fries. No wait, this guy is really nasty. Bring Nachos!”

I’d be interested in learning more about the part that isn’t Lab. For whatever reason Labs crossed with herding breeds seem to turn out in one of two extremes. The gentlest souls you’d ever want to have as a dog or a natural inclination towards territorial aggression. Another possibility is a cross with a breed with an inbred disposition for dog aggression. I can’t tell you how many times I’ve run into dogs purchased through rescues, intentionally identified as Lab crosses, or boxer crosses that were all or in part pit bull crosses. I have no problem with pit bulls but a Lab is a Lab, a pittie, a pittie.

Either way, part of the reason you’re the only one having a problem is likely the physics involved. Dogs respect size, not actual size, but perceived size and while you might think in the pound department you’re bigger you’re doing the math wrong. A dog’s weight should be multiplied by 3 and with some breeds 4. A dog has 4 wheel drive and a low center of gravity so if your dog weighs 60lbs, you’re up against a 180 – 240 lb man. Without some sort of physical advantage  your dog is going to blow you off. If you can’t control her physically then you can’t teach her to exert self control. This likely can be addressed via a collar type change.

First and foremost though, what I would do were you a client is assess what’s going on between the two of you in the house and look for ways to tune up the relationship there before we changed a collar or dealt with the dog aggression problem.  If you can’t get her to stay on a mat without budging while you’re cooking and eating meals, for 5 minutes on a mat by the door before and after every walk and bathroom break and a few other civilized dog exercises, you’re not going to get her to listen to you outside the house, dogs or no dogs. I’ve had a lot of remarkable turn arounds with this sort of thing and you will too but I think you need to find a more balanced training approach.

Alternatively, I suppose I could stuff you full of food until using doggy math you were bigger then your dog.