Puppy Socialization – What It Is and How to Do It

Puppy Socialization, What It Is and How To Do It 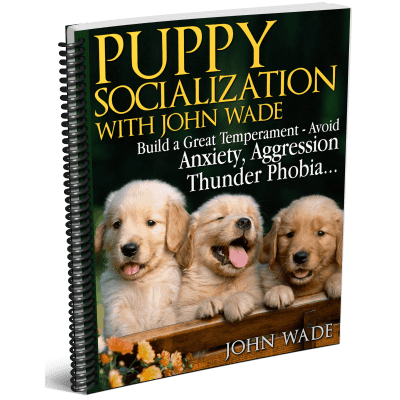 Whether they realize it or not, puppy socialization is not what the amateur dog trainers are actually selling when they advertise puppy socialization ‘classes’. They should be avoided. You can and should do a much better job of imprinting your puppy and create a bomb proof go anywhere, do anything temperament yourself.

A dog’s critical socialization period is THE a part of their lives where whatever they experience from the perspective of sound, sight, smell, touch, and relationship will impact them positively or negatively for the rest of their lives.

When breeders and then dog owners fail to actively expose puppies to the vast range of normal stimuli and experiences, both urban and rural from a sound, sight, smell and touch perspective and with human contact from the perspective of age, gender and ethnicity, etc. the default behavior is often fear and anxiety which in some dogs can also manifest in aggression. Completely avoidable. Except that amateur dog trainers offer puppy ‘socialization’ classes that have little to no positive impact and plenty of potential for negative impact.

Failure to properly socialize is irreversible and is one of the most common and most serious forms of neglect inflicted on dogs. The majority of the responsibility for this falls squarely on the shoulders of the average breeder, and the average purchaser, by default, must make up for the lost time the moment the puppy becomes theirs.

Unbalanced socialization and its traumatic effects are not unique to dogs; it is common to other social species as well.

“In humans, the absence of love and cuddling increases the risk of an aloof, distant, asocial, or sociopathic individual. Over mothering can also have detrimental effects. It occurs when a patient insulates the child from outside contacts or keeps the apron strings tight, thus limiting opportunities to explore and interact. In the end, over mothering generally produces a dependent, socially maladjusted, and sometimes emotionally disturbed individual.”

Suffice to say, how you plan on going about social imprinting a puppy is an important consideration if you want that stable go anywhere, do anything unflappable dog.  – 73 pages