Dog Socialization in the Dog Park

I have a 2-year-old Australian Cattle Dog. She is great, obedient, smart, etc. I have had a problem with her dominance/aggression since I’ve had her as a six-week-old pup. She still gets into frequent altercations with other dogs when she is off a lead. Can you help?

When I take her to the dog park she often challenges other dogs. A typical interaction will start with her approaching a dog, then getting in its face. If the dog doesn’t submit or back down then she snaps at them. The other day that behavior escalated (as it often does) to the point where she was in a scrum with a lab cross and when that dog had enough of it and tried to get away, she grabbed its hind leg and dragged it back for more. I don’t know how she picks them and many times if I see her head drop like she’s getting ready for an encounter I can head her off with a “be nice” command but every once in a while she ignores me and things escalate quickly.

I’m reasonably sure there isn’t anything “wrong” with your dog. The issue is more likely being considered an issue because of a common erroneous expectation that dog owners have of their dogs in what they expect of their (and other) dogs from a sociability perspective. It’s a common problem in dog parks and a source of frustration for many.

When considering the extent to which they should encourage their dog to socially interact at a dog park or on the street or elsewhere with strange dogs, dog owners should give some thought as to which of four sociability categories their dog might fall into.

There is the “Party or Disney Dog” category of dogs. These are the dogs that welcome social interaction with other dogs whether they have prior contact or not.

There is the “Who’s In Charge?” category, which are dogs that can interact with unfamiliar dogs but will at some point feel the need to establish hierarchy. 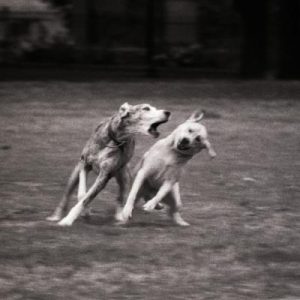 The third group is the “Masters of the Universe” category. These are dogs that for genetic reasons (usually), perceive other dogs as subjects or threats.

The fourth group is “The Pre-Teens” which are all of the above before they reach adulthood – typically 18 months of age or younger. (Dogs that have not achieved adulthood, even those in the “Masters of the Universe” category are almost always wired to be less confrontational until they have better developed an adult’s physical resources. This is one of the reasons so many people with dogs in the “Masters of the Universe” categories find themselves in trouble at the dog park. Their dogs have for an extended period of time behaved quite sociable, but then hit adulthood and become too assertive for the environment of a dog park.)

With the exception of the “Pre-teens”, which category a dog finds itself in can be influenced by two main factors. One of which a dog owner has control and one which they do not.

The first and likely the most powerful is the dog’s breed genetics. If you look at dogs that return to the dog park day after day because they always “get along” you’ll see a pattern. Labrador and Golden Retrievers would be two likely candidates for this group. Whereas in the “Masters of the Universe” group (unless they are under the age of 18 months) you are highly unlikely to encounter them in a dog park setting. These are dogs genetically inclined for dog-to-dog aggression or for guarding characteristics.

The second influential factor is a dog’s individual temperament which is itself influenced to some extent by genetics but also by what happened during its critical socialization period (3-12 weeks of age) inside and outside of its litter experience. The second and third main factors influencing temperament are the environmental stimulation the owner subjects the dog to when it is unsupervised and a dog’s perception of its relationship with its owner.

If during its critical socialization period (particularly between approximately 8 – 10 weeks) a pup has a negative experience with another dog that is not counterbalanced with many positive experiences there is the significant possibility that it will make a lasting impression and later in life exposure to unfamiliar dogs will trigger apprehension if not all out fear.

A dog’s day to day unsupervised environment can (and often does) unnecessarily negatively impact its sociability with unfamiliar dogs. Dogs that are allowed to spend unsupervised time in yards and at windows that allow a street view often don’t start out displaying overt agitation when dogs are walked past their owner’s property but over time develop increasingly aggressive responses until the trespasser dog is out of sight (in their minds due their diligence and aggression display). This can greatly influence their ability to exert self-control around other dogs whether walked around the neighborhood or at the local dog park. 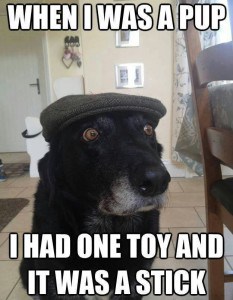 Another factor that can have a negative impact is when a dog perceives their ‘at home’ relationship with their owners from more of a “great roommate” perspective as opposed to teacher/student relationship. As a result, when their owner attempts to temper behavior that is growing overly rough in the dog park setting they do not respond. Dogs that know each other well can generally be relied on to work things out however in situations where the dogs are unfamiliar with each other and they are not of the “Party/Disney” or “Pre-Teen” categories there is a greater onus on the dog’s owner to supervise and guide their dog’s behavior. Otherwise, the dog is subjected to the coarse behavior may, depending on its own sociability respond by replying in kind or submit to the bullying; either response sending a message to the socially inexperienced or inept dog. Typically the longer it takes for a dog’s owner to intercede or another dog to discipline the bullying dog the more likely that when the dog finally meets its match there will be a much more serious outcome.

I suspect your dog falls into the “Who’s in Charge” category. If their owners are diligent in their supervision and the dogs have a clear understanding that when their owner speaks, they must listen, for dogs in this category, a dog park is one possible setting for them to get their exercise. If not it’s best to not stress them, you, other dogs and dog owners out and find other ways to exercise them.

3 thoughts on “Aggressive in the Dog Park (Australian Cattle Dog)”