My 2 year old Australian Shepherd, Phoebe is animal aggressive. I’ve read several of your posts and I’ve read some awesome answers. However, none that are a perfect fit so here’s my dilemma. Obviously I know she has herding instincts and so this isn’t completely uncommon. She kills birds and snakes and squirrels etc. And that’s fine. Recently she has been killing neighborhood cats, not so okay. Then today, she KILLS another one of our dogs. She was raised with this dog for well over a year! I tried to break up the fight to no avail.

She gets plenty of attention and exercise, so I’m at a loss. Any suggestions for me? She’s usually a well behaved dog. She’s very smart and friendly although she doesn’t like strangers unless she sees we are welcoming of them. I just didn’t know why she would be THAT aggressive especially not being a cross breed. Thank you for your time!

Let me start by saying, take what I have to say with a grain of salt. I’m only going on the basis of the information you’ve shared above and as a result I’m having to extrapolate. It’s not the best medium but it’s all we’ve got. For this sort of issue I’d much rather do a phone consult.

The level of animal aggressive behaviour of a dog like yours can’t be attributed to a single cause. It might be, but that’s rare.

There are range of possibilities of contributing factors towards this sort of behaviour.

The above are a few of the factors that I examine when assessing my aggression cases. Sometimes you can get information in these categories and sometimes it’s not available. If not, it becomes guess work. The value/weight that should be given these guesses is highly dependent on the assessor’s experience.

If I were working with you and your animal aggressive Australian Shepherd, I would be asking quite a few questions before offering a confident opinion as to cause and subsequently treatment. For instance, how does a dog with such a known high prey drive end up with such a high kill rate? That generally indicates that at least part of the problem is tied into your relationship with the dog. The way the dog is handled, and the training approach you’ve used may be a contributing factor as to how things got this far.

I have no doubt that in spite of what this dog has done you still have love for the dog. However, it may be that your love is blinding you a bit to how extraordinary your situation actually is. I’ve found that if this is indeed the case and it’s not honestly addressed it ultimately negatively impacts rehabilitation.

Set love aside for a moment and apply this – without distractions – training/respect test which are centered on 3 basic self restraint tasks (stay, recall, loose leash).

1. If you were to make a cup of tea in your own kitchen and told this dog to stay on a mat while you did so would your dog, without treats or your monitoring for the slightest twitch, do so? Or would you be drinking a lot of cold tea?
2. In your own yard, does your dog come when called or does your dog react as if you’ve made a suggestion?
3. Does your dog keep the leash loose regardless of distractions when you say Heel, and walk about the inside of your own home, or yard?

I think a dog that can do these 3 things reliably without serious distractions and without treats is up for consideration as to being on its way to being considered a well behaved dog. However, just barely. If not, something is wrong. You’ve had the dog for some time, it’s already 2 years of age and is of a breed known for their ability to work. It’s possible that your dog sees you as more of a room mate as opposed to the sort of individual it will turn to for guidance. Well trained dogs ultimately learn as part of their training that upon occasion you will not be asking them, but are telling them to do something.

This is important. If you can’t get a dog to exercise it’s suck it up muscles for you when asked to do the simplest of tasks the likelihood that the relationship you have between you is of the sort that will lead to rehabilitation in (whole or in part) and an end to the killing is extremely low in my opinion.

It’s possible that there’s something wrong with this dog’s wiring as this level of being animal aggressive seems an odd (but not unheard of) characteristic in the breed. I would consider tracking down litter mates from the same or similar litters. See if you can learn if there are dogs from the same bloodlines acting out of context of the norm. Years ago I worked with 3 Australian Shepherd dogs that were over the top territorially aggressive. It turns out they were all from the same litter. Those 3 dogs were all ultimately euthanized and from what I understand so was ultimately the entire litter.

I think is worth bringing up and factoring in your track record regarding keeping other critters that come within the range of this seriously animal aggressive dog, safe. I think you’ll likely agree that frankly it isn’t that great. Especially if things have escalated to the point where another dog in your own household has lost its life. For what it’s worth it’s possible that as far as cause the reason for the the dog’s death is unrelated to the others killings. I’d need to ask a few more questions.

It may be that the socially responsible thing to do is to find a more experienced home to attempt rehabilitation. Alternatively, especially considering this background, it might be best to euthanize this dog. I’m all for saving dogs but not at the expense of risking other lives in order to do so. The theoretical ability to rehabilitate a seriously animal aggressive dog vs the practical application, when there’s this sort of risk, I think requires a risk assessment as part of the decision making process. 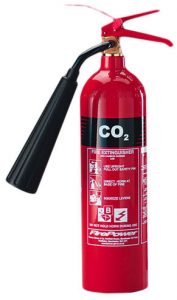 While you’re mulling over what to do with this seriously animal aggressive character, I take it from the way you worded your email that there are still other dogs in the home.

Go out and buy a rechargeable CO2 fire extinguisher (call your local fire department). Take your purchase out into the yard without the dogs but with anyone else in the household big enough to wield it and take turns putting out a pretend fire so you can get a sense of how everything works.

Hopefully there won’t be a next time but, if another fight breaks out instead of trying to physically intervene yourself (worst injuries result from this type of thing) go for the CO2 fire extinguisher. Use it to spray the dogs down. It breaks up most dog fights. At the very least it usually gives the combatants pause. Long enough for you to more safely get them separated without being bitten.