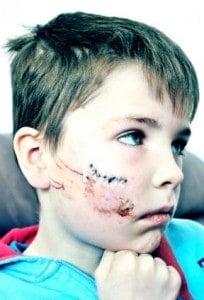 A NINE-year-old boy was taken to hospital after being bitten on the face by a Yorkshire terrier.

Owen Poole, of Delph Approach, Blackburn, was bitten by the 15-month-old pet while visiting a park with friends.

The youngster, who attends Shadsworth Junior School, needed stitches in an injury to his right cheek and may have to have an operation on his face.

His mum, Keeley Poole, 33, said the attack has left him too frightened to leave the house.

It happened at Shetland Park, Blackburn, at around 1.45pm on Saturday.

Police said the dog has since been destroyed.

Mum-of-four Keeley said: “Owen was frightened to death by the attack.

“He is a very shy boy and he has only just started going out on his own and now he is too scared to leave the house.

“He had gone to the park with his friends and was speaking to a girl who had the dog on an extendable lead, then was bitten.

“The girl took Owen back to her house where they tried to treat the bite and then they decided to call an ambulance.

“He was taken to Royal Blackburn Hospital where he had to have a lot of stitches.

“It is all swollen. It is a right mess. I can’t believe how much damage it has done considering it was just a little dog.

“We have to wait a week or so to see if it is healing properly. The doctors said they might have to have it re-opened and have it operated on.”

Owner of the dog, Lee Leecy, 37, of Orkney Close said it was uncharacteristic of the dog (improbable to the point of almost impossible – John Wade) and that he and his partner were devastated to have him put down. A spokesman for Lancashire Police said: “Officers were called to an address in Orkney Close, Blackburn, at 2.10pm on Saturday after receiving a call from the ambulance service saying that a nine-year-old-boy had been bitten by a Yorkshire terrier. The boy was taken to Royal Blackburn Hospital where he had stitches on his face.

“Both the owner of the dog and the parent of the child that was bitten agreed that the dog should be destroyed.”