"Some people have recommended that I put him (Cane Corso) down"

I have a 14-month-old Cane Corso. He a 140 pounds highly energetic, affectionate, and fairly protective dog.

Sometimes I think he doesn’t understand how big he really is. I need help to learn how to calm him down, help him to be more of a social dog and able to play well with others, easier to walk, and to help get him to stop jumping up on humans.

I am curious if his breed has some sort of predisposition to any of these problems and if these problems are worth fixing. Some people have recommended that I put him down, but I strongly oppose that view, so any help will be great.

If people are already at the point some are suggesting you put him down there’s something you’re not telling me. I know you’re writing because you want to do right by your dog but I suspect if you’re not already in over your head you soon will be. Asking if a Cane Corso is “predisposed to those sorts of problems” and I’m assuming you’re referring to being “fairly protective”, snapping at dogs, the vet, and the trainer is like asking even a casual hockey fan if Don Cherry enjoys sartorial splendor as much as a good clean hit.

How anyone could have a Cane Corso for even a couple of weeks and not at least Google such an unusual breed seems weird to me. If you had, you’d have learned that you’ve bought the dog world’s version of Mike Tyson in his prime. This is not a breed for the faint of heart.

I’m not saying you can’t get on top of this but you did not buy a “pet dog” you bought a serious hobby. One very few people have the time and the handling skills to do right by. Many of these and closely similar breeds are being given the needle before they hit 3 years of age. Some are finding their way into the news for levels and acts of aggression that should concern everyone.

You can get a lot of things wrong with a lot of breeds and be given a pass. Get it wrong with a Cane Corso and you’ve potentially got a .44 magnum with a brain and no safety. If you truly care about and want to save this dog you’d best get on it with some intense training or get him into a rescue specializing in the breed. Otherwise, I’m willing to bet he doesn’t make 3 years of age either.

True enthusiasts of the breed know where this so often leads and they’re going to be hopping mad not so much at you but at whoever put this dog in such inexperienced hands. 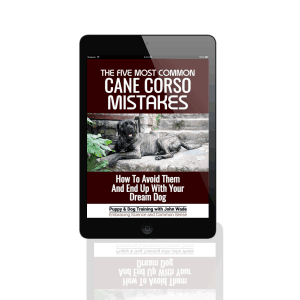 I wrote the ebook pictured to the left for people that have a Cane Corso puppy under the age of 12 weeks of age, but ideally even earlier. In other words, those who are thinking of getting a Cane Corso puppy so they can avoid these sorts of issues.

It’s not a problem-solving ebook, it’s an “avoid the problems” by being well-informed, ebook.   – The Five Most Common Cane Corso Mistakes, How To Avoid Them And End Up With Your Dream Dog

171 thoughts on “Aggression Problem in a Maturing Cane Corso”